How did I become a widow? It started in the basement. One night my husband fell asleep in his recliner watching TV and sometime soon after he and his Dewar’s bottles took up residence downstairs. He was a high functioning alcoholic – which is a clinical-sounding way of saying no one knew he drank scotch before breakfast. He was living the life of a happily married professor by day and a passed-out drunk at night. A close circle of friends and family were helping me help him. His doctor and therapist never said anything about Robert being deathly ill. Then suddenly he spiraled a few months after his 50th birthday and was given the diagnosis of having two weeks to live. All the frustration and anger of living with an alcoholic was suddenly transformed into devastating heartbreak. Nineteen days later, Robert was dead. My story doesn’t end there; my new life began.

As a writer I’m a professional observer and found myself documenting the transformation of my life:  the discovery that my husband was a closet alcoholic, the hellish years of a loved one’s addiction, Robert’s devastating diagnosis, and navigating my way through widowhood. A feature article in Newsday When We Becomes Me chronicles the change from wife to widow. In an essay in The New York Times Modern Love column When I Was Left to Speak for Both of Us, I’m romancing the stone, doing everything I can to design Robert’s headstone. An essay in Newsday Life-At-A-Glance takes a glimpse at our life through my day planners of the past decade. But it was my essay in The New York Times Opinionator column The End, Surviving an Alcoholic that established my status as the voice of widows of alcoholics. It was the third most emailed Times article of the day and received over 700 comments on the Times’ site. I continue to receive messages from people around the world: women in my position (“I felt like I was reading about my own life.”); directors of recovery programs (“You’ve taken a good whack at the stigma and saved lives.”); and those still drinking (“You helped my whole family.”). Mostly, though, it’s women like me who reach out. A widow from Belgium, whose alcoholic husband died in 2007, wrote me a three-page note: “I apologize for this very long email but this is the first time I can actually tell my story to someone who understands.”

Here on Long Island, I live with the man I met and fell in love with two years after becoming a widow. Life does get better.

As Joyce Carol Oates wrote after losing her husband, “for all who are grieving, there is no way to survive except through others.” On my blog, you’ll find sisterhood in widowhood, a community that understands what it is to be a widow, in particular—a widow of an alcoholic. The Year of Firsts. Silent phones and quiet homes. Half beds. Long nights. Empty seats. Fresh tears erupting with new condolences. Life unraveling like a video rewinding. Feeling guilty? Feeling angry? Feeling alone? Bring a cup of coffee to your keyboard in the morning or settle down at the end of a long day. Whether you share or read, keep connected. Eventually we stop surviving and start living.

The word ‘late’ has taken on a new meaning in your day-to-day life, the awkward phrase ‘late husband’ or ‘late wife’ sticking in your throat, finding its way onto your lips, invading your speech. Find comfort, camaraderie even laughter in words by the widowed about widowhood.

After Robert passed, I was unable to concentrate on fiction, and gave up novels for more than a year, swapping out my favorite genre for deadly reads.  I needed to know I wasn’t alone – celebrities and nobodies, young women, handsome husbands, expectant mothers, middle-aged men – anyone can lose their partner.  A once happy couple reduced to a lone survivor.   It happens every day, but you don’t think about it until it happens to you.

A Widow’s Story: A Memoir

The Year of Magical Thinking

What Remains: A Memoir of Fate, Friendship, and Love

The Widow’s Guide to Sex and Dating 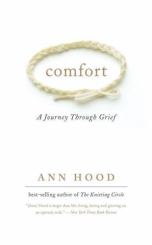 Comfort: A Journey Through Grief

How to Talk to a Widower

I found myself  drawn to films that  mirrored my widowhood, crying along with Hillary Swank each time she received a letter from her late husband in PS I Love You and empathizing with David Duchovny as he crumpled up on the floor, sobbing uncontrollably after coming home from the ER in Return To Me – a few hours ago he and his wife were dancing, then a fatal car accident robbed him of the life he knew and the wife he loved.  What films worked their way into your heart?

PS I Love You

What Dreams May Come

A social group on Facebook for widows and widowers on Long Island typically under age 65 to meet at local venues and events.

An online support group for widowed people of all ages, men and women, married or unmarried, straight or LGBT.

A Facebook site reaching widows and widowers internationally, most of whom are younger than 60, to provide support; a closed group so only members can see your posts.

An online information and self-help resource for, and by, widows and widowers.

A national network of support for anyone grieving the loss of a loved one, with an emphasis on those who have been widowed.

Poetic reflections on grief and survival.